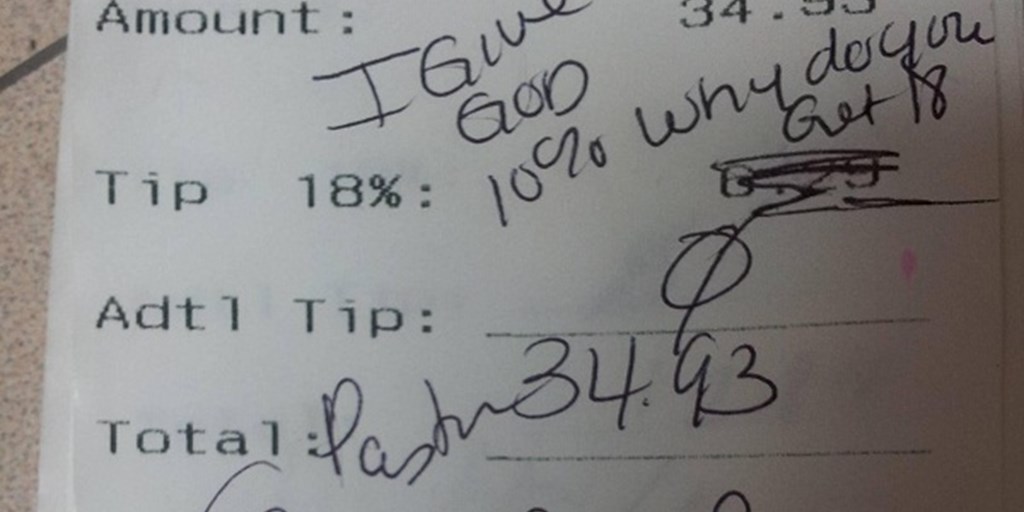 Once something is posted on the internet, it can never really be erased.

It’s a truth that frequently manifests itself through social media. This permanence can snowball when combined with the other perpetual truth about the internet: everything has, at all times, the potential to move really, really fast.

On January 25, a pastor by the name of Alois Bell brought a church group with her to an Applebee’s in the St. Louis area. Upon finishing their meal, Bell did not pay the 18% mandatory gratuity that Applebee’s automatically adds to parties of eight or more, and added a note that read "I give God 10% why do you get 18?"

A fellow server took a photo of the check and posted it on Reddit – and promptly lost her job. By posting the check, server Chelsea Welch had violated employee guidelines on the topic of 'respecting and protecting the privacy of every guest.' Firing Welch proved to be an unpopular decision, and Applebee’s social media outlets were swarmed with negative attention about how they had handled the situation. Many people sympathized with Welch and wanted her reinstated, and some even offered to start an unemployment fund for her.

A Facebook user was browsing Applebee’s photos during this time and pointed out that Applebee’s had posted a photo of a receipt with a customer’s name plainly visible on their Facebook page just two weeks earlier. Once this was pointed out, Facebook users grew significantly angrier, and by 2 a.m. the next day there were around 11,000 comments on the original status.

Applebee’s social media team finally went on the defensive (strike one) at 2:53am (strike two), and began by posting a lengthy, seemingly insincere response to the backlash as a comment on their own status, where it was quickly buried by the flow of comments. Strike three!

Next they deleted the photo they posted two weeks earlier with the name of a customer in plain sight. They started deleting comments as well as tagging certain users and copy/pasting a generic response to their complaints. This went on well into the following morning, and even spilled over into Twitter.

The next morning, the status from 2:53am had been hidden, and many thought it had been deleted – leading to even more negative comments. Naturally, Applebee’s denies hiding or deleting any comments.

Applebee’s failed in almost every imaginable way in addressing this social media disaster.

Lessons we can learn from Applebee’s failure.

If you want to promote your brand on social media (which you should!), be cautious. Be accountable and straightforward. Talk to people in meaningful ways, have some fun, and give people a reason to come back to your page over and over. The end result is a better brand presence, a great way to genuinely reach consumer segments, and, most importantly, happier customers.

How do you think Applebee’s could have handled this situation better? What would you have done if it were you?

Get the latest web news, tips & tricks in your inbox. We promise never to spam you or sell your email address.