I know, I know. There are companies that are much older so big deal, right? Yeah, but most of them aren't web design (and development, and digital marketing) agencies. In our industry, surviving for twenty years feels comparable to a hundred years. It's a whirlwind industry of constant change; where what you make and how you make it changes daily. Hell, 20 years ago, we were making websites that looked like this: 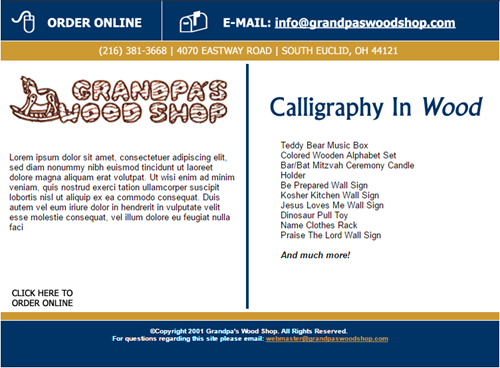 This was literally the first site I ever designed and built. I've gotten better, I promise.

I started with Aztek 16 years ago, so I've been fortunate to witness how the Web and Aztek have grown and evolved since the very early days.

When I was hired on, there were only about eight of us, and we were barely adults. For many of us, the ink on our diplomas wasn't even dry yet. The Web was still a very new place. I didn't even know HTML yet, I learned right there on the job. We smoked cigarettes right in the office. We built websites in classic ASP using tables and Dreamweaver. eCommerce websites seemed like technology only aliens from an advanced civilization could master. People weren't really talking about web standards or accessibility yet. Heck, we didn't even know what CSS was, let alone use it. Nobody was really sure how to price this stuff. It was like the Wild, Wild West.

Fake it till you make it, right?

It's probably more accurate to repeat platitudes like, "Try, try, again", or "Never give up", "Experience is the best teacher", and so on. All of that rang true. We worked our butts off. There were countless late nights, Saturdays, Sundays, even a few "all-nighters" to make things happen. Of course, it was much easier to pull all-nighters when we were still in our twenties. This was just normal for nearly a decade (we eventually got a little smarter in our old age).

Very near our ten year anniversary, something critical happened. We moved our offices to downtown Cleveland. It was a big change for us. Previously, we had been in dreary, soul-sucking cube farm office spaces. In fact, I nearly turned around when walking in for my interview at the first office because of how ugly the hallway was. But not downtown. The downtown office was cool. Big open spaces, tall ceilings, we looked like a bonafide hip digital agency. And that feeling made us believe we really were. And not just us, our clients too. You could feel it in our work, in the kinds of people we hired, in the kinds of things clients started saying to us. It was transformative. Our entire culture began to change. We became more open minded, changing and adapting with greater ease. We took on new technologies with zeal, read countless articles, and attended conferences ravenously. We switched to Agile. The list goes on.

We grew mentally, professionally, and of course, in actual size. We have forged a culture that we can be proud of, and everyone else can be jealous of. We started breaking down barriers between disciplines and departments (if you've tried to get designers and developers together you can appreciate this) and spent a lot of time thinking about how we could work and communicate better together. It was not without a few bumps and bruises, but it worked.

The timing of moving downtown also fortuitously coincided with Cleveland's resurgence as a great city. When we moved in, we were surrounded by nearly empty buildings and the signs of urban decay. We got broken into a few times and there were a few moments that we questioned if Downtown was a good choice. But just a few and they were short lived.

Things started to change quickly. New buildings started going up around us. Old ones got revitalized. Aztek started working with organizations who were influencing the revitalization of our great city. Architects and hospitals, major art and cultural institutions, large and small companies who call Cleveland their home. As the city rose from its rust belt image (and from being the laughing stock of the rest of the country), we felt like we were not just seeing it reborn from the inside, but helping to push it along, even if only in our own small ways. We met and worked with many others who were in the thick of the action, and it was exhilarating.

We've also had some of the best coworkers along the way. Not everyone stayed for the entire trip, but everyone who came through contributed to our growth and evolution, even the folks who didn't leave willingly. I thank everyone who has ever worked here. I mean that. Everyone moved us forward in some capacity.

Working for this company has been one of the most rewarding efforts of my life. Back in art college, I thought I was going to draw comic books for a living; I had no idea (I don't think anybody did) how the Web would shape the future. A pleasant surprise to say the least. I love Web design. I love the challenge of a new project. I love seeing the results. I love hearing a client say: "This is awesome and you guys are so great to work with". Aztek (and Cleveland) has been such a great place to spend my career. Now that Virtual Reality and Artificial Intelligence are upon us, I am even more excited about where our industry and city will go. When I tell my A.I. augmented brain to write my next anniversary blog post in 20 years, you may just consume it directly from my thoughts. Who knows?

Until then, I'd like to say thank you to every client, employee, and friend of Aztek.